In 431 E Palisade Avenue Real Estate, LLC, et al. v. City of Englewood, a Federal Judge just ruled that the city of Englewood is not permitted to enforce its zoning rules, because plaintiffs are likely to succeed on the merits at trial of showing that the City’s Zoning Ordinances violate the Fair Housing act, thereby rendering them unconstitutional.  The current zoning rules  do not permit assisted living and memory-care facilities in the regular residential zones (R-AAA), which plaintiffs claim is discriminatory.

Plaintiffs are two limited liability companies, seeking to develop the property they bought in a residential zone.  The question before the Court was whether the City’s Zoning Ordinances are facially discriminatory against the elderly and handicapped, as Plaintiffs alleged.

In the 8 districts Englewood defines as one-family residence districts (see Englewood Code § 250-59(A)), the ordinances state that “no land or building shall be used, nor shall any building be constructed, altered or designed to be used, for any purposes other than…” and goes on to list eight specific uses including one-family homes, municipal uses, public schools, houses of worship, etc… — but not assisted living and memory-care facilities2.

The City insisted that the case wasn’t ripe for adjudication because plaintiffs didn’t seek variances before the Board of Adjustment or even put in an application for site plan approval (they did request the city update the zoning, but the city never formally acted on the request).

The City also claimed that they aren’t discriminating because they don’t prohibit the uses, in fact they aren’t mentioned at all in the R-AAA zone.  The Court did not agree.

The Court is persuaded that the failure of the Code to employ such negative words as assisted-living centers are “prohibited,” or “banned,” or “forbidden” from any other district other than the RIM district, as argued by Defendants, does not disguise the fact that assisted-living centers are not permitted uses in any district defined residential as its primary character.

Since the residential zone where the property resides doesn’t allow “assisted-living and memory-care facilities”, plaintiffs claimed it was facially discriminatory under the Fair Housing Act (among other reasons1) and therefore no request for a variance was necessary.

The decision hinges on

“the federal Fair Housing Act, which “prohibit[s] the application of special requirements through land-use regulations . . . that have the effect of limiting the ability of such individuals to live in the residence of their choice in the community.””

Even though the purpose and intent of the Master Plan putting these types of facilities in a particular zone may have been lauded at the time3, it nevertheless deprived those handicapped individuals from living in a residential zone of their choosing, today without seeking a variance for the use.

Therefore the court found that the Englewood ordinance “does have “the effect of limiting the ability of [handicapped and elderly individuals requiring congregant care] to live in the residence of their choice in the community.””

This was the relevant part of the oral argument

THE COURT: Would you agree that handicapped individuals do not have the same opportunity to live in a congregate care facility in any district in Englewood but the RIM district? Save your argument for—other than getting a use variance, you would agree to that.
DEFENDANTS/VIVIAN LEKKAS: Other than getting a use variance?
THE COURT: Yes.
MS. LEKKAS: Well, no, I wouldn’t agree to that because it’s very important that they can get a use variance.
THE COURT: I’m just saying, the only way they can is through a use variance.
MS. LEKKAS: Correct. The only way they can is –
THE COURT: The ordinance as written does not permit that.
MS. LEKKAS: It does not prohibit it either. There’s no language in the ordinance that prohibits it. That’s essential to this case. It’s germane.
THE COURT: So a handicapped person can live in a single-family home in any district in Englewood.
MS. LEKKAS: Right.
THE COURT: But once it starts to get to a deemed congregate care facility, they would need a use variance to obtain residential housing.
MS. LEKKAS: And so would a nondisabled person, which is also germane. They’re treated equally.
THE COURT: Well, is a nondisabled person defined under the Fair Housing Act?
MS. LEKKAS: No. There are protections given under the Fair Housing Act to handicapped people, but you need to establish differential treatment. And on a facial challenge, you have the burden of showing the words in the ordinance on a facial challenge claim. So I challenge plaintiffs, look up the ordinance. Tell us the words that say “prohibit,” “forbid.” They’re not there, but they are there in the cases cited. There’s the New Directions case, which restricted methadone clinics. Uses the word “restrict,” “forbid.” The Bay Area case again, and the one cited by plaintiffs, the Montana case, a graph literally X-ing out with a dash that those—the assisted living facility is restricted, and that’s the key difference with those cases.
(ECF No. 32 at 62:4-63:19.)

As per the Judge, “the creation of a health-care village may constitute a reasonable goal for the City, but that zoning aspiration does not justify “limiting the ability” of handicapped and elderly individuals requiring congregant care “to live in the residence of their choice in the community.””

So what happens to Care One now?  At oral argument, that’s one of the points that both sides agreed on — it would go to the planning board if an injunction issued:

PLAINTIFFS/WARREN A. USATINE: . . . What we’re not here to do is what the citizens say we’re doing, which is turning Your Honor into some kind of a super Planning Board. We are not seeking that. We’re seeking to have our use deemed allowed. We’re seeking to have Your Honor order that the facility we contemplate consistently with the certificate of need allowed. We’re not seeking Your Honor to say “and just go build whatever you want.” We fully expect to—and are ready to—go to the Planning Board.
. . .
THE COURT: What would you say the relief should be if the ordinance is deemed facially unconstitutional?
DEFENDANTS/DANIEL ANTONELLI: If Your Honor deems the ordinance facially unconstitutional?
THE COURT: Yes.
MR. ANTONELLI: Then I would take that to mean that the prohibition—that the assisted living facility is prohibited, then the R triple-A zone would not apply.
THE COURT: Okay. And then what does that mean?
MR. ANTONELLI: I would think at that point because it’s no longer a use issue, plaintiff would be obligated to proceed before the Planning Board.

For anyone interested in these types of land use laws, it’s an easy read, with citations to the record at oral argument form both sides. 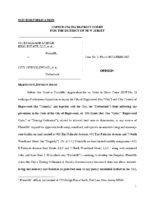