The Covid-19 Pandemic has upended many of the ways we conduct our lives.  In the May municipal elections, polls were replaced with envelopes.

Unfortunately, despite the best efforts, not all envelopes were given the same treatment.

Worse, still, it’s impossible to know how many envelopes did not arrive.  It’s not as if you can just count what didn’t show up.

In an effort to find out what worked and what didn’t, I requested information from the Bergen County Board of Elections, as to what ballots arrived and what didn’t. The staff and administration at the BOE have been helpful and worked hard to help explain the system.  They expressed a profound amount of concern for ensuring the system runs as smooth as possible and that every vote is counted.  They do a tremendous amount of work under very strict rules and tight time-frames.

Changes in the systems created issues

It seems that NJ has a new interface between two independent systems, which created some hiccups in reporting and coordination.  The County Board of Elections system feeds information into the State Voter Registration System (SVRS).  I spoke with the head of the County system as well as the head of the State system.  That integration, to put it mildly, is not seamless.

How many ballots disappeared?

By definition, it’s hard to tell.  Several reports have surfaced where one spouse sent in a ballot that arrived, but the other spouse’s ballot never did.  More still, where both ballots didn’t arrive.

How do you tell and what to do, if your ballot just never made it?

At www.DidTheyVote.com, you can see see all of our Registered Voters and the status of their VBM ballot.

The maps linked below represents the most accurate, up to date data, available from the State SVRS system.

There is a google form on the site – please consider filling it out if you mailed a ballot and it never arrived.

I will share the info collected with our congressional representatives (I’ve already reached out to some of them) and they may be able to obtain reforms at USPS and beyond in time for the Primaries, and General, if we are still Vote-By-Mail.

How many ballots were rejected? 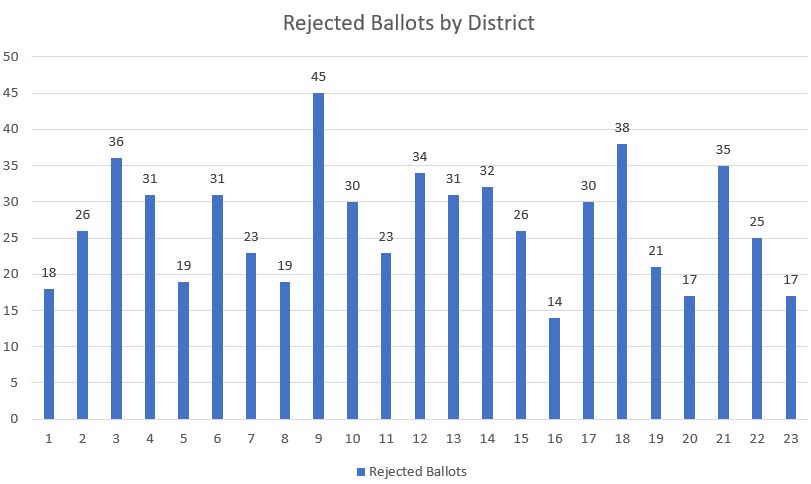 The advent of all Vote-By-Mail (VBM) had a positive effect on turnout, but it also saw an increase in the number of rejected ballots.

Why are ballots rejected?

The most common reasons for rejected ballots are:

Anyone, who’s ballot was rejected may inquire as to why (they keep the envelopes in storage for a set time) or can reach out to me and I can inquire.

*  Typically, ballots must be received prior to 5/12 or withing 48 days of the close of the polls, with a postmark of 5/12 (or earlier).  Due to several ballots missing postmarks, and the sheer number of ballots received after 5/12, the County Board of Elections reached out the Postmaster General.  He provided a letter to the County, stating that any ballots without a postmark that arrived on 5/13,  were put into the postal system prior to the close of polls on 5/12.  Therefore, ballots without a postmark, received on 5/13, were in fact, counted.

Did your ballot arrive in time to count?