Without veterans, without the service to a cause larger than yourselves, many of us simply would not be here today.  That service, right here in NJ, earned my grandfather his citizenship — and on behalf of the Township Council and the Township of Teaneck, I want to wish everyone a happy Veterans Day and thank you for your service.

We owe our veterans a profound debt.  Not merely for service, but for what that service has meant foto us all.

The history of any town is the history of its people.  And veterans have always been an integral part of what has made Teaneck what we are.  Even before we had our own name, our sons and daughters sacrificed for our freedoms in the 22nd infantry of Bergen County during the Civil War.

Last year, I focused on this day, at this time – and how it was inextricably linked to WWI and the Armistice signed to end the fighting for that “War to End all Wars”.  In many ways, we still mirror that time, including a world struck with a global pandemic.

Just as we are meeting here today, Judge A. Demorest Del Mar spoke here in 1938.  Del Mar was a lieutenant in the Navy during WWI and he said to those assembled: “We fought to retain that which we value above all earthly things – liberty.  We will fight again and again to preserve it if necessary.”

Unfortunately, those words would become true too soon.

Today, I wanted to take a little time to talk about Teaneck’s WWII veterans and specifically the way Teaneck was molded by their service.

Over the course of WWII there would be over 10M Americans called up to service. The first major wave including many from here in Teaneck. 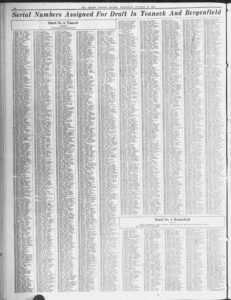 I’m sure, most people are familiar with popular portrayals, such as “Saving Private Ryan”, where 4 four brothers went off to fight from a single family.

That happened here.  In Teaneck, the Busund brothers all left on the same transport in 1942, along with over 100 other boys from our Town. 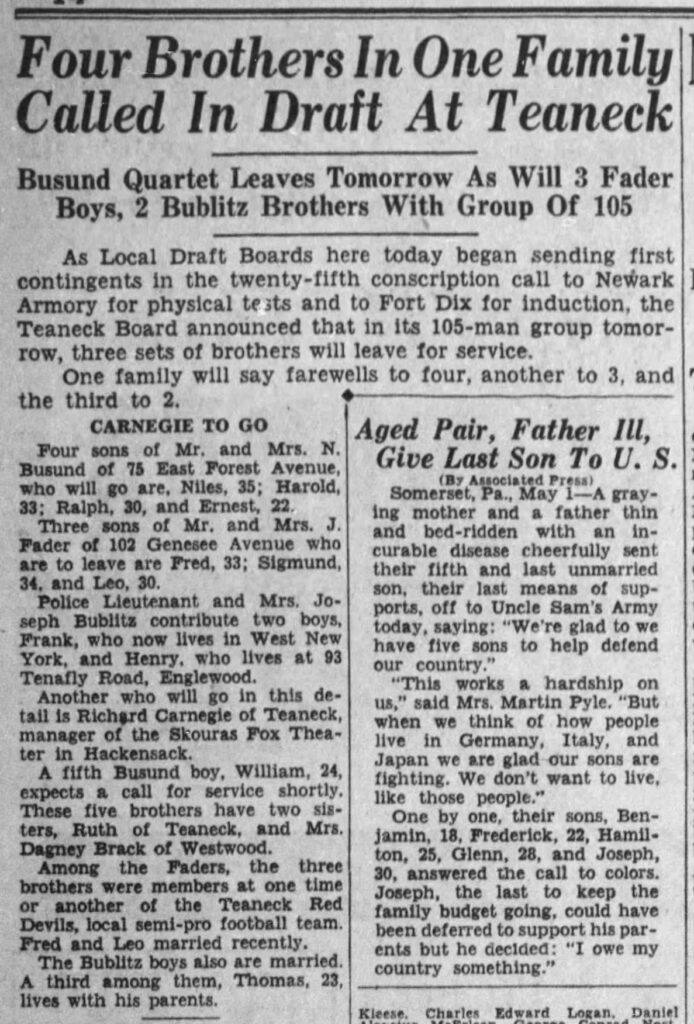 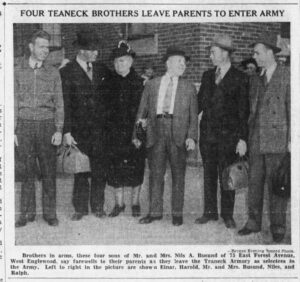 Mr. and Mrs. Busund lived not far from here at 75 East Forest Avenue.  Their sons, Niles, Harold, Ralph, and Ernest all said goodbye to their parents at the same time.  There was a fifth Busund brother William that would be called up later.

This was NOT a rare occurrence.  The Fader’s who lived at 102 Genesee Avenue sent Fred, Sigmund and Leo. 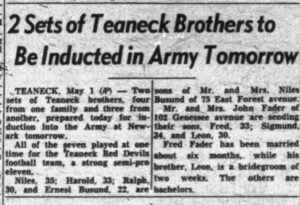 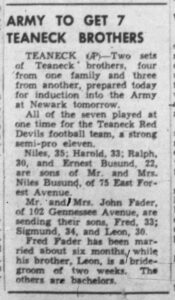 One of the first heroes of WWII to return home was First Lt. Arnold “Skid” Johnson who flew the flying fortress during the war.  During his last mission, the bomber was sent up over Rabua in Papua, New Guinea. 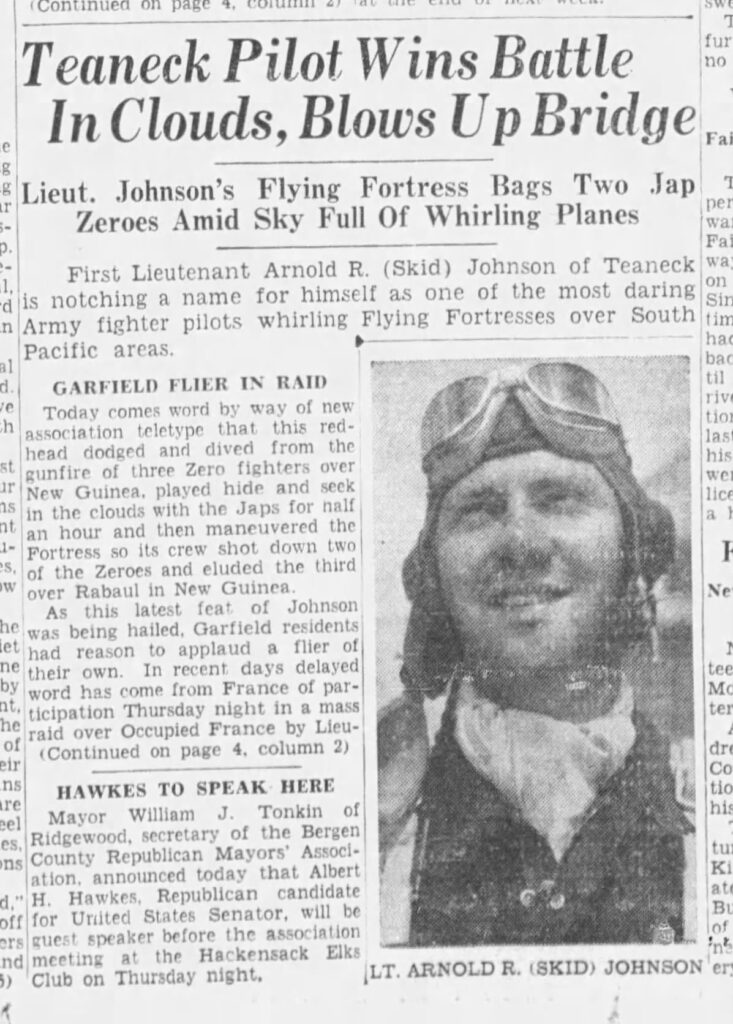 Six Japanese fighters attacked and four had closed in on him.  The fight went on for an hour and he shot two of them down.  His co-pilot was struck in the chest and the tail gunner was killed.  They shot out one of the engines and riddled the gas tank with 40 holes in the Fortress.  A second engine went dead as they tried to land and successfully navigated to safety.  He was 27 years old when he came back home.

Flying Cross, the Air Medal, and the Order of the Purple Heart with an Oak Leaf Cluster.  for valor beyond the ordinary call of duty. After being shot down, recuperating and returning to active service, he downed 10 Nazi planes in 10 minutes in one battle and was held as a prisoner of war by the Nazi’s until he was released towards the end of WWII.

He was Lt. Joseph B. Boyle who lived at 539 Standish Road.

On that first mission, he was a co-pilot on the Flying Fortress dropping bombs on German factories in Lille, France.  After the mission, Nazi fighters killed the pilot of his plane and half a dozen Nazi planes swarmed in an attack.

Joe was wounded, along with two others but still managed to take over the controls.  He brought the huge ship away from the enemy and while wounded, navigated back to his base.  His face was cut up from bits of debris from the ship’s windshield and one leg was badly torn.  In the hospital, he was met by Brigadier Generals and others who were amazed at his heroism.  But the one that literally nursed him back to health was his nurse, Ruth Varnum, a Teaneck girl from Sherman Avenue, who went overseas to take care of the wounded in France.In fact, there were many women involved in the war effort from Teaneck and beyond.

You may be familiar with the WAVEs or WAACs

Margaret Roemer, of Roemer Avenue, Ruth Martin of Fycke Lane and Sally McCracken, who graduated Teaneck High School before serving in a hospital in England volunteered through the WAACs (Women’s Army Auxiliary Corps).  Sally attended the Teaneck Presbyterian Church before shipping out.

Her Chaplain at the Teaneck Presbyterian Church at the time was Rev. Reginald Rowland.  He left on August 9th, 1942 to be an Army Chaplain, a position he also held in WWI.  Other churches also lent personnel to the war effort.  Rev. E. George Bayer of the Teaneck Methodist Church also went to serve as a chaplain.

World War II swept many changes to our town in its wake and like the times preceding it, in large part, Veterans permanently changed the look of our town.

There was a need for immediate help as members of our uniformed fire and police departments reported for war service.  Someone still needs to put out the fire. Teaneck developed the Defense Council and staffed departments with vets from WWI that had the requisite experience to help.

Seaman Franklyn Rothe was on a ship in the Pacific when it was attacked.  He was set drifting in a life preserver for 12 hours in freezing waters after the ship sunk and was miraculously rescued by another ship.  While recuperating in Massachusetts, his training proved helpful when a fire broke out at a Boston night club.  He assisted the survivors through his emergency squad, which was first on the scene.  He was a lifelong Teaneck resident and his brother, Clarence was still a 17 year old at Teaneck High School when he volunteered for the fire auxiliary to make up for those that left to serve in the armed forces. 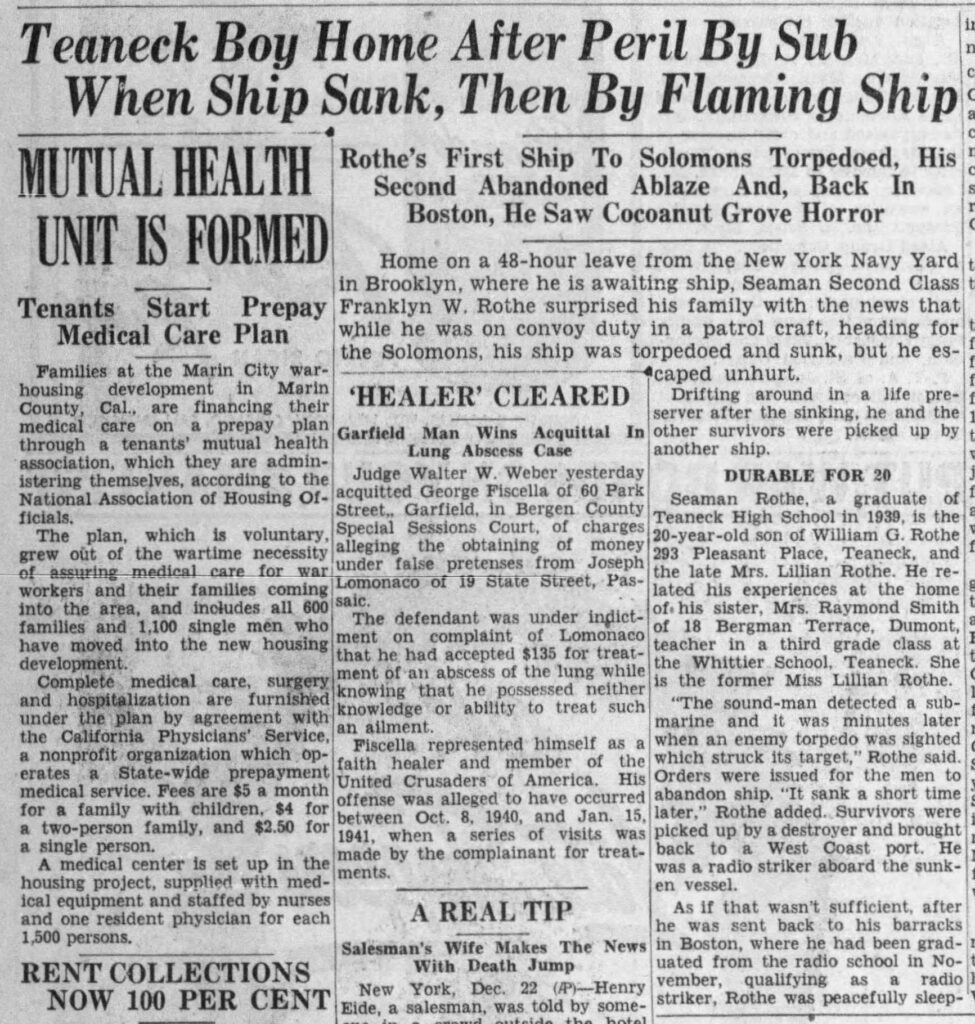 Of course, life keeps going for those left behind and changes had to be made to accommodate those that left.  No area of life was unaffected, be it education, town planning, or even parks and recreation.

Fire, police, and nearly every aspect of the town were impacted.  Volunteers would take up the slack, as we geared up for years of war.

There was concern that between an army base and NYC, we would be a target here in Teaneck for the enemy to attack. The town had to practice blackouts, where even the streetlights were painted black to obscure our existence from the enemy.

Try to imagine what it’s like when people start leaving all of a sudden in every walk of life.

The Board of Education had to scramble when two members of the coaching staff were transferred to Uncle Sam – Tommy Della Torre was the coach of the winning Teaneck football team in 1941, but someone still had to keep time at the football game after he got 1A.

Roy Thompson, age 35 was a coach for the Bergen College Baseball team until his enlistment in the Seabees, a US Navy force that would help in engineering issues at airbases.

Even if you wanted to escape the war at the local movie theater, you first had to deal with the missing staff.  John Maher, who lived on Chestnut Ave was an usher working for his dad until he was called up.

Every area of life was upended because war required people from every area of life.  Take Albert Hirt, a 33-year-old pharmacist from Maple Street, he became a pharmacist’s mate, second class, serving the troops.  He said goodbye to his brother Julian, who was drafted shortly after Albert enlisted.

Raymond Wild was Superintendent in charge of parks here in town. A graduate of Teaneck high school with a wife and a son, he was sent to train pilots as a wing adjutant & cadet captain in the Army Air Corps. Teaneck’s first Commissioner, Lacey Walker would say goodbye to his son, John Walker as he became Private First Class as a technician fifth grade.

As part of the war effort, the government rationed food and labor &

transportation shortages made it hard to move fruits and vegetables to market. Victory Gardens were encouraged for people to make their own food locally.  Property with such a garden sold in Teaneck could only be transferred after the harvest.

Paul Zitelli went overseas and his dad Joseph operated a shoe store on Cedar Lane.  He saved 300 lbs of rubber to donate to the war effort.

The auxiliary police department created under the Teaneck  Council continues to this day.

One of the veterans that served under the defense council command was Charles Andrew Wild from Woodbine Street.

He was a 45 year Teaneck resident and vet when WWII started and was put in charge of all Civilian Defense programs.

Of course, the look of Teaneck and its single-family homes would need an update for all the returning GI’s.

Prior to WWII, you wouldn’t find many apartments here in town.  If you were a returning vet, that meant a need for housing and additional housing meant significant changes.

Like most times that vets came back, returning vets in the ’40s weren’t, at least at first, presented with top-notch accommodations.  \

But this being Teaneck, we rose to the challenge.

In 1946, when vets were returning from service in need of new places to raise their families, State Street was looked at for multi-family housing.  The Patterson Plan caught the attention of Teaneck’s leaders.  The plan contemplated permanent housing rather than temporary housing, as long as the State money was used to back up private funds in constructing apartment houses.  It gave our vets a real apartment to live in, instead of makeshift temporary housing — and a chance to start their lives here.

Mrs. Mockel, a resident on Palisade Avenue came to protest just one point – that the Teaneck girls that served deserved apartments just as much as the boys.

By 1948, Veteran’s housing was approved on Palisade Avenue and the Veterans’ Housing Committee was working feverishly to ensure everything went as smoothly as possible.

As I end, I’d like to mention one last Teaneck WWII veteran named Dr. Walter Farr of Griggs Avenue.  Dr. Farr was commissioned as major in the Army medical corps.

He came back in 1945 and was honored by the Mayor, Council, and other visiting dignitaries, often speaking of his service.  He said at the time:

“So today let us not forget that the greatness of America is not an accident but the result of our national honesty, energy, and ideals.”  He said that America must remain strong “so that she can lead, not lift the other nations, of the world to a higher plane of living a higher standard of international dealings and toward Peace on Earth. Good Will to Men.”

It’s my hope that as we honor those veterans that served for the ideals Dr. Farr described, we recognize the work that lays before us locally and as a nation

I’m proud to say that Teaneck has always been so thankful, both in word and deed towards our veterans. We give thanks that such soldiers lived and we will continue to honor the debt we owe you, both by welcoming you here in our town and by celebrating the sacred freedoms you risked everything to protect for us. 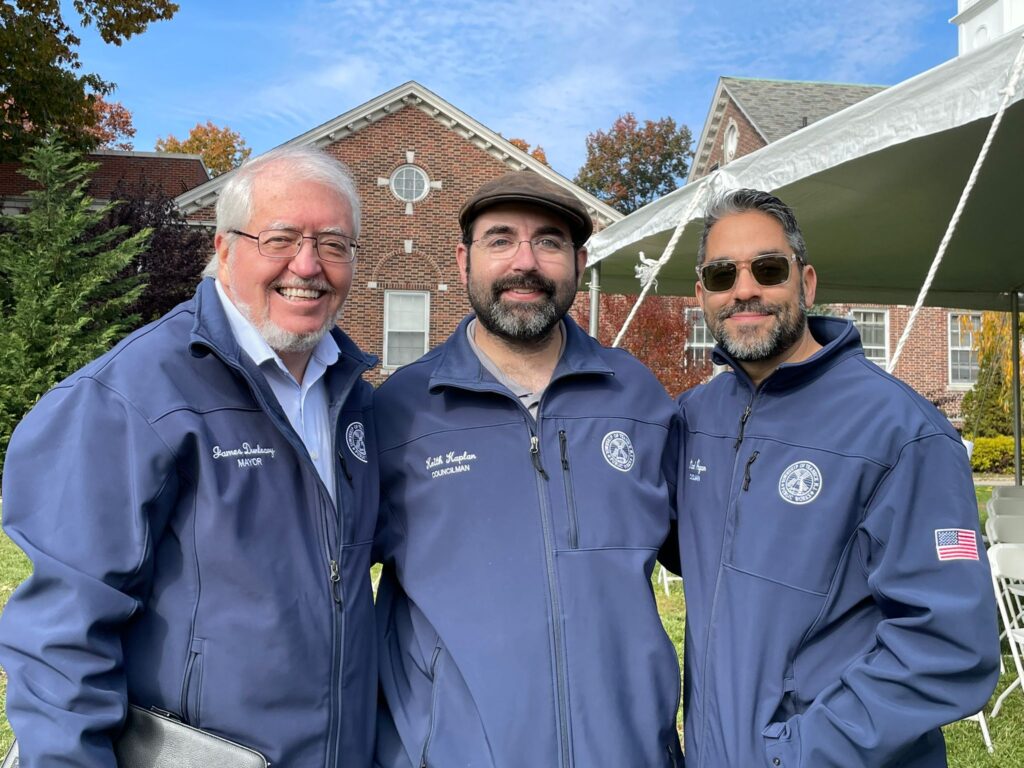 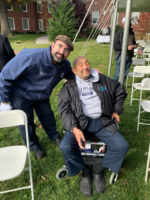 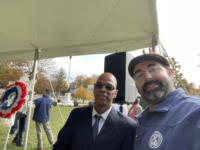 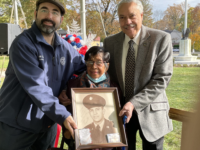 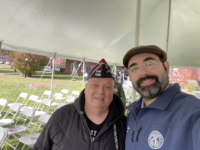 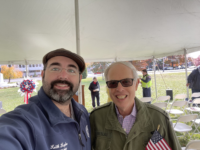