125 years ago today, on February 13, 1895, “Teaneck, dissatisfied with an administration which permitted “taxation without benefit” took advantage of an Act of Legislature to “secede.””

The first officers were:

At the time of Paul Volcker’s retirement in 1950, the Sunday Sun describes the origins of the Township.  You can read the article here:  Teaneck’s 1st Shaky Steps Formed Basis of Success

Like many another municipality in the state, Teaneck became a separate corporate body because of dissatisfaction over the manner in which taxes was spent. Most of the Township was then part of Englewood and “Englewood,” says an old account, “had a drainage problem.”  The people of the Teaneck section, mostly farmers and such wealthy landowners as the Phelps, sympathized with the Englewood city Fathers, but they couldn’t see their tax dollars going where they were receiving no benefit, so they decided to separate.  The act of secession was finally passed by the Legislature on February 13, 1895 (emphasis added). 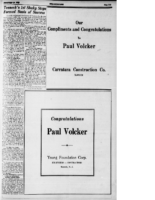