In 1917, Mr. Doskow came to Teaneck and moved into a house on Elm Avenue.

During the day, he travelled to NYC, where he was an editor of Popular Science Magazine, The Delineator and The Women’s Magazine.
Mr Doskow served on the Board of Education for six years, starting in 1929. He also served on the Town’s 35th Anniversary Committee.
During his tenure on the Board of Education, Teaneck grew and opened two new schools, the Hawthorne School (July, 1925) and Bryant School (April, 1929). 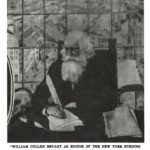 Mr. Doskow, who was also an artist, donated paintings of the man for whom each school was named, which were installed in their entryways.