“Mr. Andreas gave the property to the town, now known as Andreas Park, with the proviso that he was to live in it tax free. Eventually this caused an uproar led by Edyth Whipple and the embarrassed Mr. Andreas left for California. I cannot see anything wrong in the agreement, but politics in Teaneck could make an issue of anything, even gifts.”

She was part of the Teaneck Tax-Payers League, which brought into existence our current form of government.  She also fell out of sync with her fellow league

members, frequently opposing and criticizing their decisions.  Anything she deemed wasteful spending or bad public policy earned a public rebuke. She frequently criticized the Board of Education, the Mayor and demanded attention of residents for her causes.

At times, she was effective, at other times she was ignored and on at least one occasion, she was arrested (at a council meeting) and tried for her efforts.

Her name is Edythe Whipple.

On a rainy November 1st, 107 years ago today, Edythe Whipple moved to Teaneck.  Her husband, a news-reel camera man, traveled a lot for work, leaving Mrs. Whipple with an infant and a lot of time spent alone.

Mrs. Whipple said that after women got the vote in 1920, she became interested in politics, frequently making friends with state and county politicians.

When she heard that the Township would be implementing zoning restrictions, she objected, wanted to create large duplex buildings in the West Englewood section where she lived — and used her connections to secure permits for two family dwellings, prior to the laws taking effect.  Within a few years, hardly a meeting of the Town Committee (later Council) or School Board could go by, without Mrs. Whipple keeping them on their toes.

“If in my desire to give to my son the higher facilities of education, to equip him to become a citizen capable of serving humanity, if my duty as guardian to a minor, to secure for him his rights and equity, has thrust upon me the burden of trying to obtain permits to build $30,000 duplex houses, is to brand me as being here for the selfish motives, then God made mothers to be selfish”
– Edith Whipple as quoted in the Bergen Evening Record Sep. 26, 1929

She contacted a local reporter to start a column on local issues.  It brought a spotlight to her causes.

“They began fearing me”, she said.

While she had a bit of a following, there were many times she stood alone as a contrary voice to majority actions. 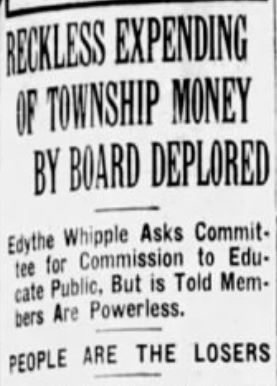 She objected to the Council Manager form of government, in part because it didn’t allow control of BOE finances, favoring a ward system similar to Englewood.  She was against limiting property rights of individuals, in favor of a societal goal of single family zoning.

The West Englewood section of town where she lived, had a distinct look and character at the time – one many wanted to keep.  Several came out in opposition when a plan was put forward to consolidate the Township under a single banner, swapping “West Englewood” for “Teaneck”.

After a stream of residents came to indicate they wanted no changes to a post office system servicing the West Englewood section, Mrs. Whipple, a resident of Ogden Avenue, “took to the floor to favor the proposed change on the ground that Teaneck was an integral community and should be known by one name only in postal records.”

She wound up seeing the change.

Challenges to the School Board, Council and others

“I’d always go to the Board of Education meetings to talk against taxes. Mr. Brett, my neighbor, was president of the board.  I alone defeated one school budget.” (Interview with Edythe Whipple available at Teaneck Library archive)

Prior to one school board adjournment, she raised several questions regarding procedures for acting on bids as well as the necessity for paying tuition from taxes for students that were physically unable to attend classes.

She was informed that State law, like today, required such expenditures for home-bound children.

Frustrated at the lack of acknowledgment she received to her concerns from the School Board, Mrs. Whipple frequently came before the Town Committee and even “requested the chairman to appoint five members of committee to sit with the school board on matters or finance relating to the school expenditures”.

The chairman advised that “the school board was an independent body and the Town Board had no authority”.

She frequently was a relentless critic of anything she deemed wasteful spending of public funds.

This was one exchange:

Clashes with Authority at Council

“A momentary threat of a clash, when C.W. Brett questioned the questioner as to whether she intended to convey an impression of wrong doing on the part of the board was averted by change of the subject before controversy arose.”

At the Council meeting of February 3, 1931, the constant stream of questions against Council actions, came to head.

After introduction of an ordinance prohibiting certain trucks from using certain streets in town, Mrs. Whipple demanded more info than the Mayor and Manager were about to provide.

An audience member called out a comment and Mrs. Whipple responded: “Mayor don’t know what is is either.”

And then, as they say…. things escalated rather quickly.

The Mayor admonished her: “One more remark like that and I will have you put out”.
Whipple shot back: “I will not leave the room.”
Mayor: “There will be no more remarks from you.”
Mrs. Whipple: “You place me under arrest and I will sue you for false arrest.”

Mayor Van Wagner then called in the police:  “Serve a summons, officer.”

The trial of Edythe Whipple was quite the affair, but will leave that for another post.