This year, Teaneck saw record turnout at the polls.  One member of the Board of Education received more votes than any local office holder in the history of the municipality.

Resident Tom Abbott, made a comment here, providing a link to details on his website, where he broke down the voter numbers.  And one thing stuck out to to me.  Three of the districts, at first glance, seemed to have far fewer registered voters than others.

Districts should have, roughly, an even number of registered voters.  But as I started to look into the issue, I found that Teaneck, compared to its neighbors also has far fewer districts.

Fact: Teaneck has the highest number of registered voters for any Municipality in Bergen County.

We do NOT have the greatest number of Election Districts. 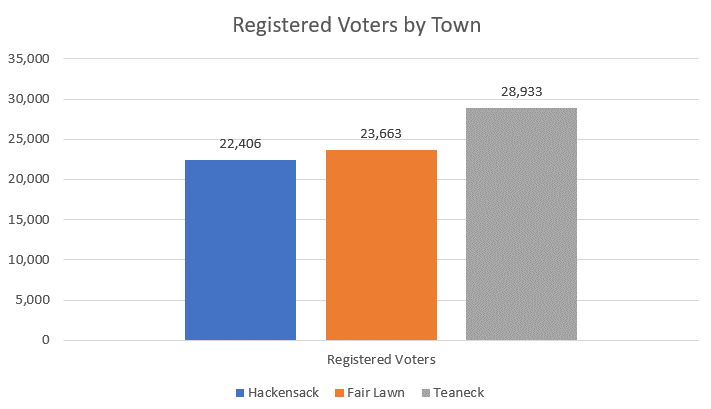 Hackensack, with over 6,000 fewer registered voters than Teaneck, has 25 election districts, compared to our 23.

Fair Lawn, with over 5,000 fewer registered voters than Teaneck, has the same number of districts as us.

When it comes to the average number of voters per district, Teaneck packs more in than anyone. 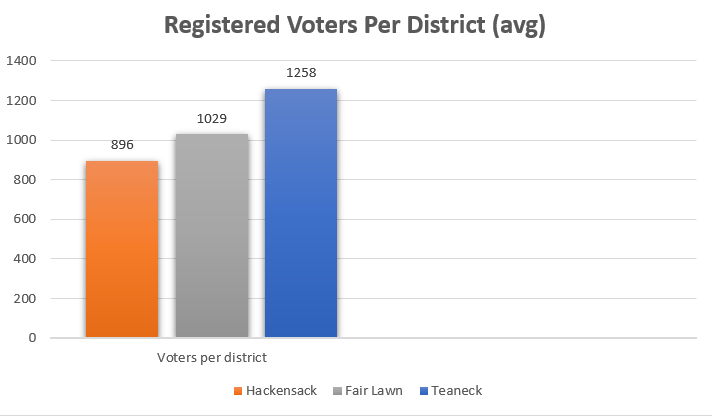 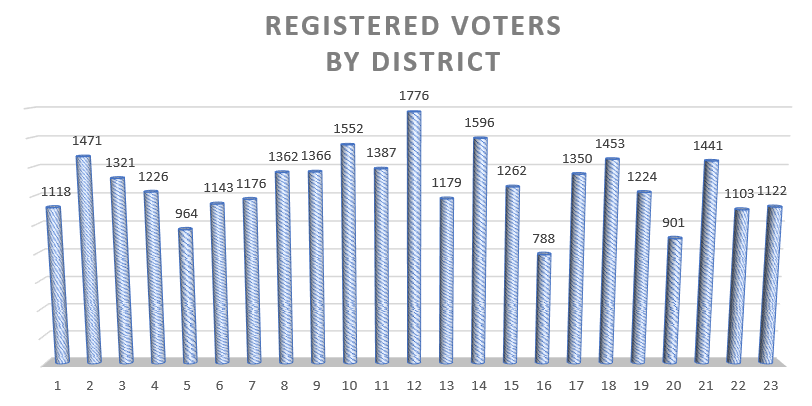 Why does any of this matter?

There are several reasons.

There is a County Committee pursuant to Title 19, Section 19:5-3

Membership and organization of county committees; vacancies; certification of unit of representation and number of election districts.
NJ Rev Stat § 19:5-3 (2013)

As you can see from the By-Laws of the Bergen County Democratic Committee:

The County Committee shall be composed of one male and one female member elected at the Biannual Primary Election by the Democratic voters of each election district of the County pursuant to law.
– Section 1. ELECTED MEMBERSHIP

and the By-Laws of the Bergen County Republican Committee:

Section 1. The membership of this organization shall be composed of members of the Bergen County Republican County Committee who have been duly elected or appointed pursuant to Title 19.
– Art. III, Section 1.  Membership

On the local level, there is a municipal committee for each party, comprised of one male and one female from each election district.

What is the right number of districts and why does it matter?

When one election district has 2.2x as many registered voters, the lines are 2.2x as long.  The volunteers are asked to work 2.2x as hard.  The number of machines / ballots and equipment needed is in part based on the number of expected voters.

In Title 19, Section 19:4-13, the relevant numbers to look for are election districts with more than 750 or less than 250 votes cast in any two consecutive general elections.

How many Teaneck Districts had more than 750 votes cast in two consecutive general elections?

We have 7 election districts that have consecutively had more than 750 voters, and all but three did, this year.

No.  Because our elections are “at-large”, meaning that you vote for members of Town Council and Board of Education regardless of where you live, redistricting will have no effect on our elections.  Whoever receives the most votes will still win.

What is the process for redistricting and how many districts will we have?

That is what I intend to look at.  On Tuesday, I will present the information above to the Council and ask that we create a task force to look at our election districts.  We should have clean and clear districts, with roughly the same number of voters in each.

To bring down the average number of voters at the polls to the maximum permitted (750), would require an additional 7 districts.

We currently average over 1,250 registered voters in each of our 23 districts.  Bringing that number down to 750 would mean adding 16 districts.