The deadline for filing of Tax Appeals has been extended at least 30 days to May 1st (or 30 days after the State of Emergency has ended, whichever is later). 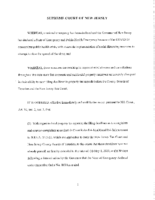 For those that haven’t been flowing the issue closely: END_OF_DOCUMENT_TOKEN_TO_BE_REPLACED

Here is how Councilman Haggerty described the problem in January of 1948: END_OF_DOCUMENT_TOKEN_TO_BE_REPLACED

At some point in the past, the township passed a rule to prohibit businesses from operating on the first floor of buildings.  Not only could they not operate, say, in a basement — but they had to be seen from the street.

Maybe this provision made sense at some point in time.  It has become pointless today.

Whether or not it made sense when the provision was last tinkered with (in 1951) is debatable, but it appears that I’m not the first person to think this is pointless and counter-productive.  Teaneck also considered it pointless in 1973.

That’s the year that the Teaneck Council passed ordinance 1568, which reads in relevant part:

Section 3. That Sec. 5-14 entitled “Buildings to be open to public view” and Sec. 5-15 entitled “Business to be conducted at street level; exception as to bowling alleys” of said Chapter 5 entitled “Amusements” be deleted in their entirety“. (emphasis added)