Unofficial Results, pending certification for the May, 12, 2020 municipal election:

Congratulations  to everyone that ran and I look forward to working with the new council on July 1st. 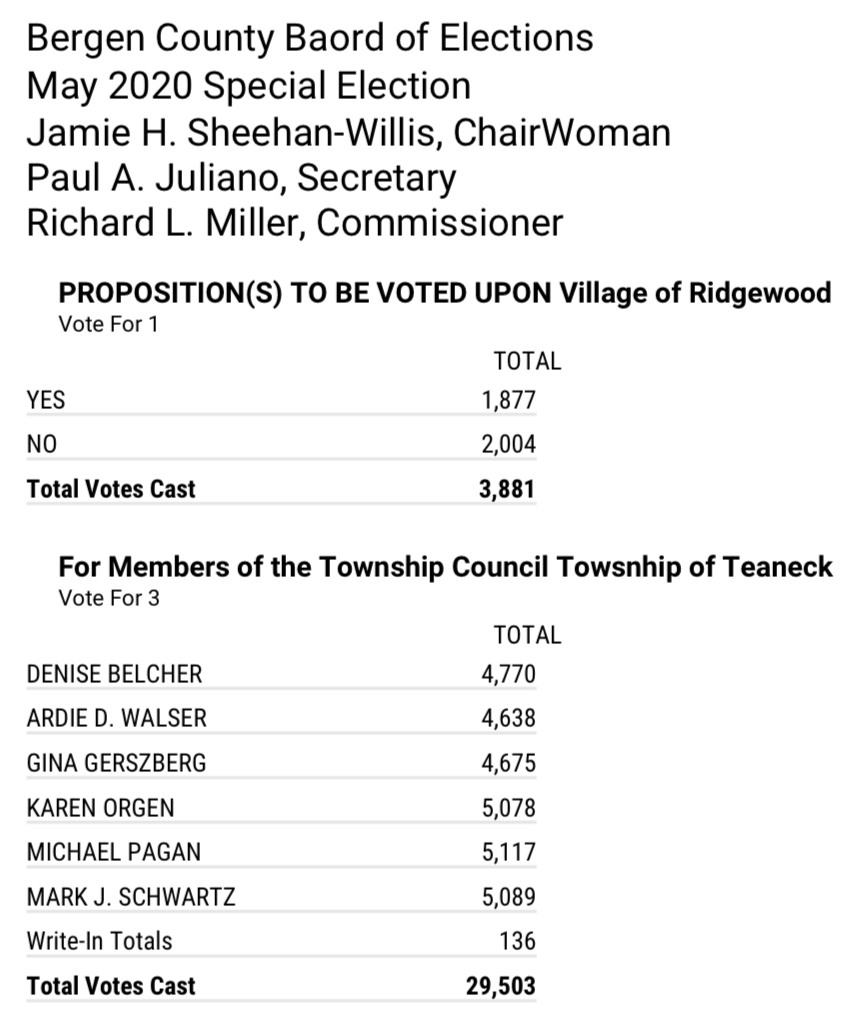 Who will be on Council?

Teaneck’s municipal government operated under the Council-Manager form of the Faulkner Act.

We (residents) elect seven members to a council and they choose a manager who is tasked with the day-to-day operation of the Municipality.

Since 1988, Teaneck residents go to the polls in staggered council elections in even numbered years to choose members who serve 4-year terms.

This week, 3 of the 7 council seats were up, and in two years, the remaining 4 will be voted on by residents.

After each election, the newly constituted group will meet on July 1st at a “Re-Organization Meeting” to determine a Mayor and other positions.

Each of the 7 members of council represent everyone in the municipality.

[As one of your representatives, I will do my best to respond with information to any inquiries received]

Who will be Mayor/Deputy Mayor?  Does it go to the person with the highest vote tally?

Not necessarily. The Council will meet on July 1, 2020 at a reorganization meeting.  The 7 duly elected members of council will choose from among themselves as to who shall be Mayor and Deputy Mayors (Council will also choose a Manager, municipal attorney, prosecutor and several other positions).

If you want to read about the issue of “highest vote getter becoming mayor”, I’ve written out the history below so it can be easily referenced.

A note on turnout

We just had a council election – but while the majority or residents are registered voters, most did not come out to vote.

This is NOT a new phenomenon.  But I think it warrants review and discussion. Reports show higher than average turnout for recent elections. I think it can be much higher

Some historical data and information on Teaneck voter turnout:

In Mayor Feldman’s May, 1966 reorganization speech, he lamented the lack of turnout in elections.  He noted that in the 1960’s turnout dipped below 50% of registered voters and wondered what could be done to help halt the trend.

Mechanisms were suggested, including staggering elections (we currently have staggered elections every other year for 3 or 4 seats respectively. At the time, all council-members were elected at once, for 4 year terms which was changed in 1988 via referendum), but ultimately, the trend of people not voting, has continued.
It is not clear why people choose to not vote.

In future posts, I will make some recommendations about what may help to increase turnout.  I welcome suggestions.

Addressing commonly held misconception that the individual elected with the “highest number of votes” should become mayor.

While it does have brief and passing references, there is very little support for this concept in law or history.

From 1930 when our Town adopted the Council-Manager form of government to 1988 (when we switched to the current Faulkner act), we elected 5 members of council, every 4 years [Ed note: the number of council members switched to seven in 1962, when our population grew to greater than 40,000 – requiring an additional two seats], to serve for four year terms.

This is how the law worked back then:

In 1988, after a referendum was passed to proceed under the Faulkner Act, elections were staggered, so only a portion of the council would be elected every other year.

Because council members were not all chosen at the same time, this change made any determination of which member received the “highest number of votes” impossible.

May, 1966: In his address to the Township, Mayor Feldman lamented the lack of turnout in elections.  He noted that in the 1960’s turnout dipped below 50% of registered voters and wondered what could be done to help halt the trend.  In his speech, he referenced the issue of public misconceptions.

“I suspect that this bullet voting is motivated in large part by the commonly held belief that the high man in the voting is entitled to the post of mayor.”
– Matthew Feldman

In response, Councilman Henderson gave a brief historical record of the issue.

When a resident later asked “if there was a written law on elected officials that the Councilman with the highest number of votes be elected Mayor“, Mayor Costa replied:

“It was not necessarily the Councilman with the highest number of votes.”

In the 1970 reorganization, even before the 1988 referendum, we can see it was not the policy to elect the highest vote recipient as Mayor.

Here are the election results from the 1970 election:

Each of the highlighted council-members had a higher vote count than Mayor Burr.

So if someone tells you that the highest person should become Mayor, point them here.

2 Replies to “A New Council”