This is not unprecedented

Teaneck and Bergen County have celebrated Israel on many occasions in the past.  The largest celebration, on the 25th Anniversary of the State had dignitaries from the Federal and State attending, as well as the Mayor (Frank Burr) accepting gifts in a municipal ceremony at Town Hall, full parade and regalia to Votee Park and festivities. 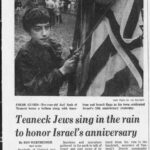 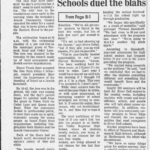 At other times, proclamations have been made, including one for the 50th Anniversary by Mayor Paul Ostrow in 1998.

Every year, Bergen County has a flag ceremony where they raise the Israeli flag amidst speeches from dignitaries.
You can watch several below from the last few years alone.

Every one of these flag raisings was done by our elected Commissioners, on government property.

Is it different in Teaneck?  Does it create hate?  No.

Just yesterday, the Township saw an event for Eid on the municipal green.  The event was attended by members of the council, and the Crescent Flag is still displayed.  We celebrate our diversity.

The reasons for the Israeli flag-raising are enumerated here in the resolution passed unanimously by your council:

The ceremony can be enjoyable and a time to support neighbors with relatives and friends in harm’s way or it can be a time to used to divide.  But the choice is yours to make.

Hatred is not a flag.  It’s an action taken (or not taken) by people.

Hate has no home here.

Other Towns across NJ raising the Israeli Flag:

Resolution of the Teaneck Council:

One Reply to “Guest Post on Flag Raisings (and response)”