On Thursday, March 11, 2021, the Traffic Bureau was asked to conduct a speed survey on Washington Place. This request was prompted by a resident’s email that claimed that there was a speeding problem and that vehicles were traveling the wrong way on a one-way street.

A site survey determined that Washington Place is a 25 mile per hour one-way roadway that runs eastbound from Teaneck Road to Crescent Avenue. It then becomes a 25 mile per hour roadway that runs east and west between Crescent Avenue and the Englewood border.  It is a residential neighborhood that typically sees a medium volume of vehicular traffic. Parking is allowed on both sides of the roadway, leaving the required space for vehicular traffic to travel safely.

On Tuesday, March 16, 2021, PO William Brittingham placed the Speed Sentry traffic analyzer in front of 163 Washington Place, to collect data from vehicles traveling eastbound towards Englewood. The analyzer was left in that location for 18 days. Due to several battery changes, a total of twelve analyzed days were recorded.

After reviewing the data obtained by the traffic study, it does not appear that there is an excessive speeding problem on Washington Place. The average speed limit was revealed to be 19.7 MPH and the 85th percentile speed was 26 MPH. I believe that there are vehicles observed exceeding the speed limit at times, but that it is not a constant problem.

The Traffic Bureau will place the radar trailer at several different locations on Washington Place, to educate motorists of the posted speed and their current speed. As a follow-up, we will conduct radar enforcement to ensure adherence to the posted speed limit. As for the request to install speed humps, it is recommended that the Township continue to adhere to its M.U.T.C.D. guided position of eliminating the use of speed humps unconditionally. To address the claim of wrong-way drivers, Sgt. Quinn did a site survey of the intersection of Washington Place and Crescent Avenue. He determined that the current “One Way Do Not Enter” signage was adequate and in good condition. The violators are most likely occasional inattentive drivers that fail to observe the signage.

The Traffic Bureau will continue to monitor this area for any current and future problems that may arise.

You can view the Extended Speed Summary Report  and Volume By Speed Report here:
(pdf embedded below) 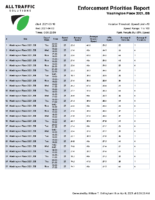 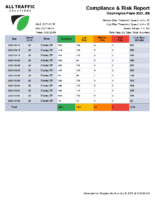 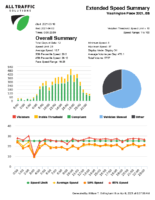