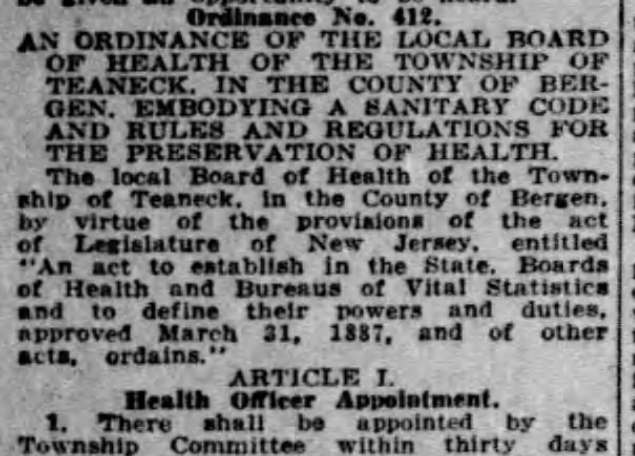 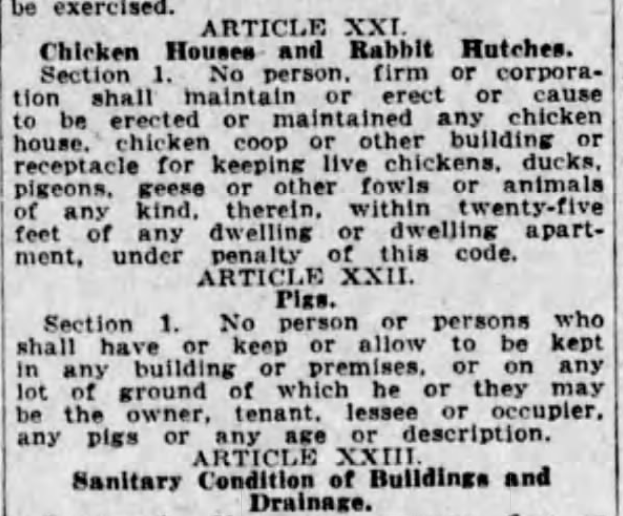 At the time, keeping chicken coops 25 feet from dwellings or apartments wasn’t too difficult.  While the number of homes were steadily growing (Teaneck had 4,192 residents at the turn of the 1920s and 16,513 by the end of the decade), there was still considerable open space.
That started to change in the 1930s as more people started to move.  The of the opening of GW Bridge & Rt. 4, coupled with the sale of the Phelps estate after Mrs. Phelps death, led to a large influx in the number of homes available here.
This is from the meeting of April 6, 1937:

Back then, we had very simple zoning.  They had 3 types of zones A (residential), B (apartments), and C (commercial).
The proposal was to ban chicken coops in Class A (residential) locations.
As it turns out, Council wasn’t sure it was legal to only do it in Class A locations.  Can something be unhealthy in one place, but healthy in another?

Therefore, chicken coops would be banned anywhere in the Township:

A movement is born

With the ban on chickens, came the movement to remove the ban.
The first attempt I’ve seen was on April 20th, 1943:

There have been many tries to remove the chicken ban over the years.
Prior to the current push, the last one was in 2013-14, when residents appeared before the council and requested the removal of the 1937 ban:

At first not much came of it, but residents were persistent.
Several months later, the health department and building department were asked to weigh in.

Mr. Katter, the health officer did, in fact, research the issue.
At the time, I was a resident.  But I’ve always been an opinionated one.  Here was my opinion from back then:

“Sorry- not going to allow chickens to be raised in Teaneck. Health department listed many solid reasons (vermin, large animals etc) plus I’m the one who is going to get complaints from the upset neighbors. And rightfully so. I heard Sussex county has some great farms for sale… Go for it… you can move, stay and suck it up or simply run for office and push your rural agenda through.”

Clearly, challenging me has repercussions, but that’s for another thread.

What did the Health Department say?

These ordinances (6-5) and (6-6) were originally adopted in 1951. Back then, Teaneck was far more farm, less developed and less suburban than today. The animals listed in the prohibition of keeping and ownership include farm animals (pigs, cows, horses, etc.), including fowl (ie: chickens, ducks, etc.). These animals, if allowed, will change the quality of life in Teaneck. These animals create unnecessary noise, attract vermin, create odors, all of which will generate numerous complaints. The keeping of poultry may also increase a presence of more dangerous predators like coyote and fox. The more wild animals drawn to the area create a public health risk of zoonotic diseases like rabies and tick borne diseases and can result in more potential car accidents and/or road kill. Over the years, we have had people requesting to allow such animals as pigs, chickens and bees for all good purposes such as pets,food, pollination of home gardens, etc. I do understand these desires for personal purposes, economics and being a naturalist.

As the health officer, I do have the responsibility to protect the public health and quality of life as I see appropriate. The 3 health officers that preceded me also felt that same way and this ordinance has been in effect ever since. I see no reason to amend the ordinance.

What did the Building Department say?

I have reviewed the Teaneck Town Code as it relates to this resident’s request to raise chickens on private property and offer the following comments:

The Township of Teaneck developed from its rural roots into a suburban community and continues to experience the trend towards a more dense physical environment. The smaller size of the average residential lot may not provide the ability of the property owner to buffer this type use (raising of chickens) from adjacent properties, rendering the use inappropriate for most neighborhoods. If this request will be considered further, I recommend that the Township Planner provide input to assure that any modification of the regulations does not negatively impact the Master Plan document.

I’m still of the opinion that this can be done well, as it’s been done in other locations.  Neighbor concerns are valid, but capable of being addressed via appropriate zoning/legislation and permitting.

Having heard from those in favor, the current council majority has indicated that they may be willing to change the ban, effectively signaling the ending of 84 years of poultry prohibition.  Other towns have done so and they seem to have had very few issues, so I believe it’s possible.

But, history has shown that when people start to come out against, those maybe’s sway back to no’s.

So…. don’t count your chickens before they’re hatched.