When one starts to review laws, either on a local or state basis, the complexity factor is readily apparent.  There are many layers, tweaked over the decades (and sometimes centuries) which make legal counsel a requirement, even to understand what otherwise look like simple words.

“The commission shall consist of not less than five nor more than seven members, appointed by the mayor of the municipality…”

Who does the appointing?

If you answered, the Mayor, you probably aren’t alone.  But you’d be wrong.

If you read “mayor”, think Manager…. except for the places that isn’t applicable.

But, not all rules are as hard to understand.

Let’s take a look at this posting from the People for Progress team during the campaign:

“f you filled in the black ovals inside the write-in candidates boxes when trying to vote for Ardie, Denise, and Gina, don’t worry…

If you write in the names, you must be sure to write them in EXACTLY as they appear on the ballot: Denise Belcher, Ardie D. Walser, and Gina Gerszberg, or you risk having your vote not count.” 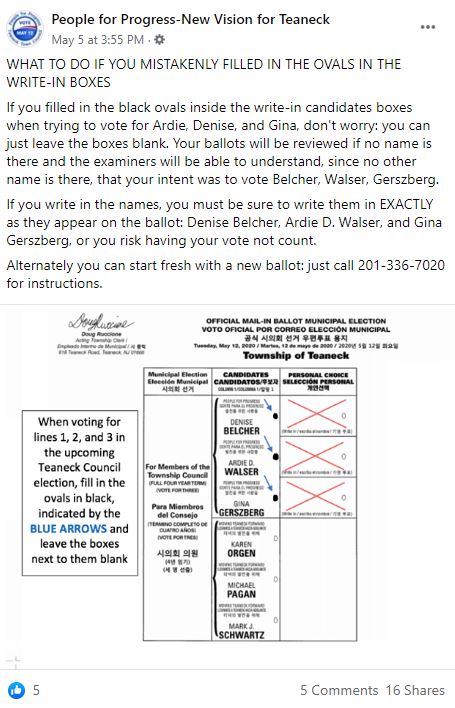 To be clear, this is wrong in law, as well as precedent.  And anyone that followed this advice had their ballot invalidated.

The law here is clear:

f. If a voter marks more names than there are persons to be elected to an office, or writes or pastes the name of any person in the column designated personal choice, whose name is printed upon the ballot as a candidate under the same title of office, or his choice cannot be determined, his ballot shall not be counted for that office, but shall be counted for such other offices as are plainly marked.

In Murphy v. Ocean County Board of Elections, the appellate court of NJ had another chance to change its longstanding precedent, in 2005.

In that case, there was a one vote margin of victory for one candidate and a single ballot rejected – because the ballot did what People for Progress suggested above.  They wrote in the candidate’s name in the write-in, personal choice section.

“The write-in vote for Murphy was rejected on the basis of N.J.S.A. 19:49-5 because his name appeared as a candidate on the printed machine ballot.”

Source: In re Ocean County Commissioner of Registration

Here’s how the Court addressed the issue:

Murphy’s contentions, raised in Point III of his brief, warrant further discussion. Murphy contends that the one write-in vote cast for him was improperly declared void and not counted.
Where voting machines are used in an election, write-in ballots are subject to N.J.S.A. 19:49-5, which provides:

If you think about the reason behind the rule, it makes sense.

We first note that the obvious purpose of N.J.S.A. 19:49-5 is to prevent a voter from casting two votes for the same candidate — once by marking the printed name and a second time by writing in the same name.

Once the ballot is entered, the person and the ballot cast are severed.  The ballot becomes anonymous.  Once can’t vote for someone twice, but if we permitted a “write-in” for someone on the ballot, a voter could vote for them once as a candidate and then again TWICE as a write in candidate in a municipal election allowing tree votes.

Ok…. but what about when it’s a paper ballot?  Clearly, you can tell that it wasn’t a vote for the candidate AND a write-in on the paper, right?

No, says the court.

That unambiguous statutory direction is consistent with the rule applicable to write-in votes where paper ballots are used, N.J.S.A. 19:15-28; it is, however, more explicit in directing that such improperly cast write-in votes not be counted.

Nothing in this Title shall prevent any voter from writing or pasting under the proper title of office in the column designated personal choice the name or names of any person or persons for whom he desires to vote whose name or names are not printed upon the ballot for the same office or offices. . . . (emphasis in original)

In Murphy, the candidate argued that the ballots were confusing, instructions were insufficient and raises several other issues.

The court found none of them acceptable for several reasons:

We also note that the voter who improperly wrote in Murphy’s name on the ballot — just like every person — is charged with knowledge of the law; N.J.S.A. 19:49-5 clearly and unambiguously invalidates the write-in vote for Murphy in these circumstances. Even in the context of the Criminal Code, where violations incur far more severe consequences, we hold persons to knowledge of behaviors prohibited by the Code, without requiring a copy of the Code to be provided to each person.

2.  This was in the voter’s control to do correctly

“Here there was no problem “beyond the voter[‘s] control.” Referring to “cases involving invalidated write-in votes,” the Court cited a judicial history of “distinguish[ing] errors due to extrinsic problems from errors caused by a voter’s own neglect.” Id. at 476, 753 A.2d 1101. ”

“It is not too much to expect that a voter would notice that his candidate’s name appears as a choice on the ballot and that there is a clearly prescribed place on the ballot for expressing that choice. ”

“…the unknown write-in voter here was not deprived of the right to cast a vote for Murphy. The  printed ballot gave the voter that opportunity. Every voter in the township election had a clear opportunity to vote for Murphy without writing in his name on the ballot. Moreover, a reasonable voter would understand, without explicit instruction, that it is unnecessary to write in the name of a candidate whose name already appears on the ballot, and that a vote for that candidate must be cast by marking the place on the ballot where that candidate’s name appears”

The court ends the opinion with a suggestion:

“While not constitutionally required, nor required by current law, an explicit instruction would impose no significant burden upon the election authorities. The ballot might include, for example, language such as the following:

“We recommend that the Legislature consider requiring such a modification to all New Jersey election ballots.”

To quote HL Mencken:
“For every complex problem there is an answer that is clear, simple, and wrong”

If you followed the advice of People for Progress and wrote in their names…. your vote was invalidated.