It’s unclear for sure, but we will track developments here.

As of today though — prohibition is still in effect.

And on November 8, 1928, Teaneck Police arrested someone for distilling wood alcohol on Fort Lee Road and remanded them on a disorderly conduct charge. 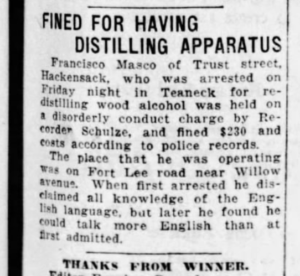 While some continue to beat the drum that prohibition is on the way out and the US should end this drug war, the Teaneck Police Department is still required to abide by the dictates of the rules in place today.

On November 15, 1928, the prosecutors’ office, in coordination with the Teaneck Police department, made raids on two Teaneck locations, one on Forrest Avenue close to Englewood and the other on Teaneck Road, right by the Municipal Building.

Both beer and whisky were found on the premises.

As the public is aware, beer can be a gateway drug to harder spirits.

While advocates of drug legalization / the end of prohibition, claim that such drugs as beer will be legalized for only adult consumers, others claim the truth of the matter is that the legalization of alcohol would clearly be putting kids at risk.

Beer and hard liquor were found. 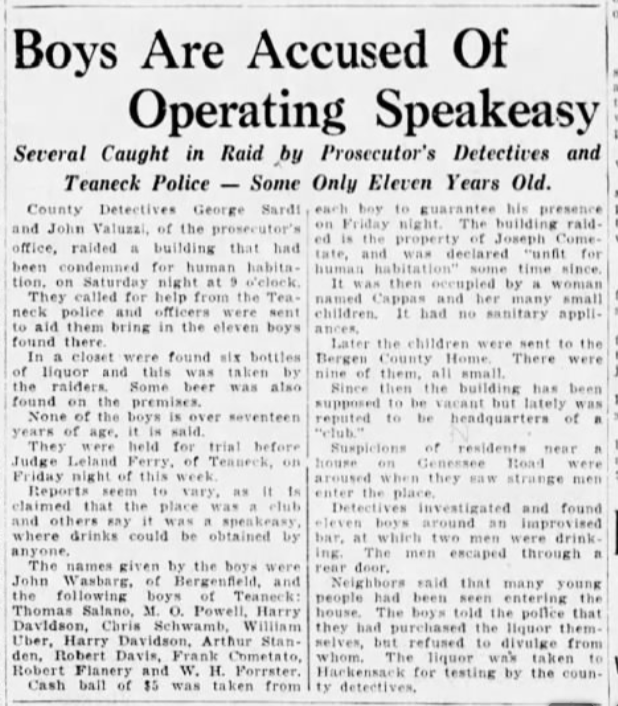 More than a year into following the news of the efforts to repeal prohibition, raids continue here in Teaneck.
On September 23, 1930, police executed a raid and made three arrests along with the seizure of stills and equipment from a building on River road.

Advocates of prohibition point to the failure to contain the drugs by the government in a never-ending war that we can’t win. 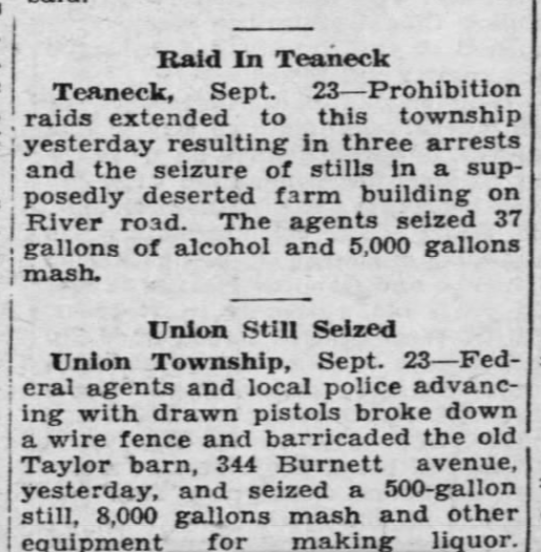 As we welcome in 1931, the new year comes with yet more raids, at the never-ending proliferation of drugs seems to defy the drug war being waged against it.

On January 15, Federal, County, and Local law enforcement made a number of raids.  Considerable expense and planning have gone into these endeavors.

Two 15-gallon kegs of beer were found at the bowling alley and Red Robin Inn on Cedar Lane.

The owners were charged with possession.

The drug war continues, but with so much proliferation within our community, it’s hard to see how it could ever be won. 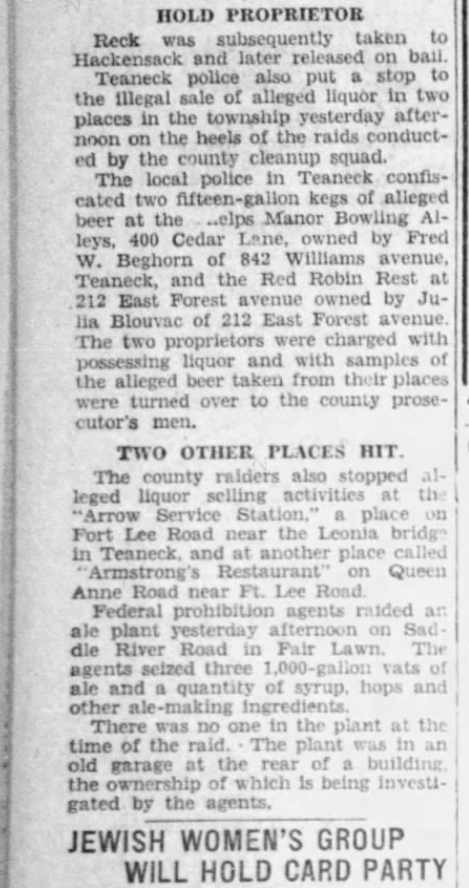 Yet another year of waiting for this awful drug war to end.  The arrests keep taking place.  The cost in terms of police and criminal justice system requirements is ever on the rise and those against prohibition have made little headway with those dead set on keeping the menace of these dangerous drugs away from their neighborhoods.

Today, the paper has called for a new idea — perhaps a truce?

Under such a compromise, liquor would only be permitted in government-controlled stores under licensed conditions and the dangers of the saloon or home use wouldn’t be as feared.

Read the suggestion in the December 28, 1932 Record editorial below:

As expected, the new Congress is moving on repeal to the never-ending drug war.  But, Bergen County has already chosen a side.

April 27, 1933: Bergen’s Delegates will vote to end Prohibition at the Convention.

10,000 signatures have already been collected.

For those arrested and caught in the web of our criminal justice system by the war on drugs, this day likely will only be the start of a long road back to recovery.  For others, it will represent a sea change in how the government treats residents using such drugs.

Either way, it’s going to be a rocky road for a bit as we see how towns react to the new normal.

If the failed drug war ended tomorrow, on October 1, 1933, would you be able to get a drink of those intoxicating spirits?

It depends.  As States are working out how the repeal will function at a local level, NJ is one of the few ready with a repealer to greet the reforms. 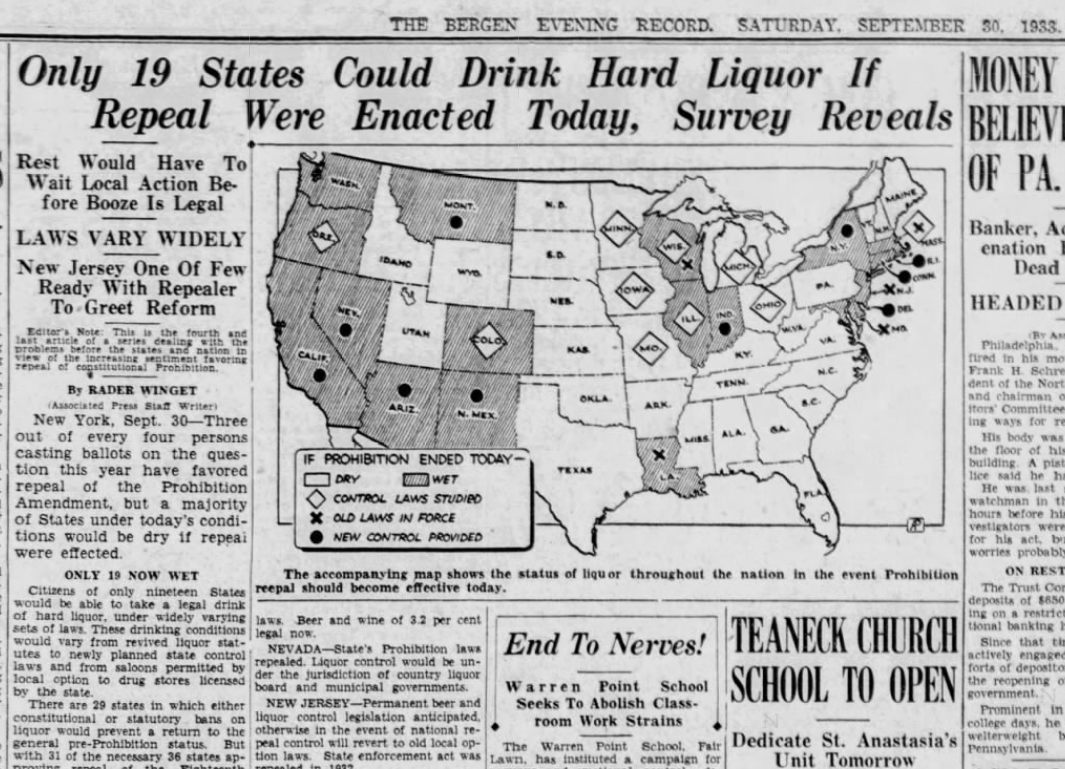 It’s taken 13 long years, but the national obsession with banning the sale of “dangerous” drugs such as beer and whisky will end tomorrow, December 5, 1933.

NJ will not permit you to make your own at home (although it’s not exactly like a plant you can grow in the yard), but you will be able to purchase alcohol in government-licensed stores.

The different States will have different rules as to whether or not sales are permitted.

To see how States are handling, refer to the chart below:

As feared, the increased costs associated with licensing have made the illicit creation of alcohol popular again.

The State of NJ has responded with legislation for combatting the issue.

“Health departments in the largest cities found liquor of inferior quality “about like bootleg.” The state health department invoked the pure food and drug law. Sale of one and two-ounce drinks in sealed containers appears popular.”

It’s been a year since the war on drugs ended.

How did it work so far?

Bergen County had more raids this year for illegal alcohol than it had the year before under prohibition.

But there were many positives as well.

Skeptics point to issues created by the government. Namely, the fact that taxes are too high, creating a black market, and that only Trenton-approved sellers, create a system where lawmakers can bully merchants who won’t abide by their demands for ever-increasing tax revenues. 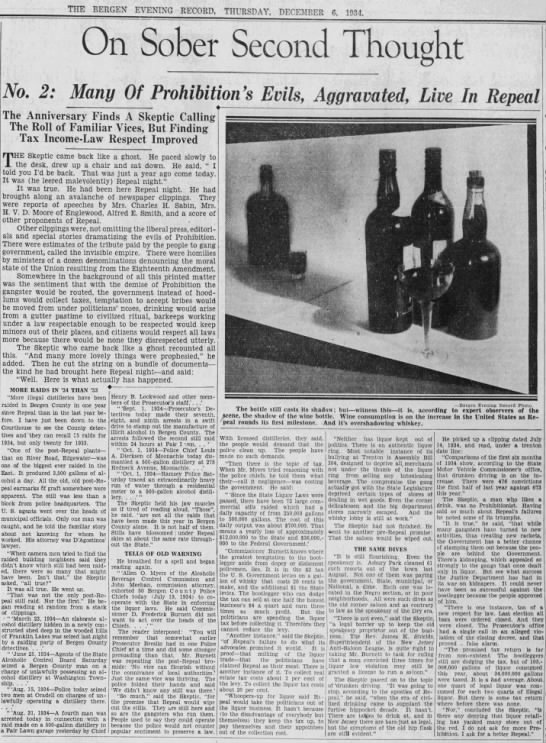 Did you think this was a marijuana-related post?  You may be right.

There’s a lot we can learn from history.

Marijuana and drug prohibition have many striking similarities to alcohol prohibition.  And while no analogy is perfect, it may be helpful to see where errors of the past can help us in the present.

We shall find out soon enough.

Either way, in 100 years, history will likely speak about our efforts on marijuana with the same quaintness in which we read about alcohol.