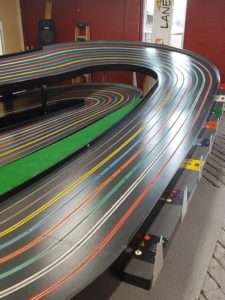 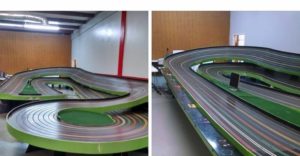 The latter amenity (mini-bowling) came with a wrinkle.  Here’s what the owner wrote the town back in July when he was applying for building permits:

We had some extra space and wanted to add  Mini bowling. We where [sic] told now that the clerk is speaking to the towns [sic] attorney about the mini bowling. Mini bowling is like arcade bowing where you put your money in the machine and you get to mini bowl a few frames with a small ball. There is no need for bowling shoes and the lane is much smaller then a real bowling alley. I attached a picture of the one we would be buying , it comes with two lanes . The place is going to be for slot cars not a bowling alley.

This is a wonderful amenity for Cedar Lane.  It would bring family-oriented entertainment to the business district, and along with them, the money families spend on shops, restaurants, etc…

Here’s the provisions at issue in the lawsuit:

[R.O.1951, ch. 5, § 1; Ord. No. 1004, § 1; Ord. No. 1568, § 1.]
No person, whether owner or sponsor, unless duly licensed in accordance with the provisions of this article, shall have, keep, own or maintain within the Township any billiard rooms or poolrooms, dance halls, skating rinks, roller derby, bowling alleys, tennis courts, squash courts, swimming pools, golf courses or other places where amusement or recreation of the public is carried on as a business. (emphasis added)

Sec. 5-14Buildings to be open to public view.
[R.O.1951, ch. 5, § 14.] Whenever any business licensed under this article is carried on indoors, the place of business shall at all times have the entire interior of such room or place in which the business is conducted, open to full view from the public street. Such view shall not be obstructed by the use of nontransparent glass or of a shade, blind, shutter, screen, merchandise or any other article placed within or without the building in which such room is located. (emphasis added)

At the July Town Council meeting, I requested information about the ordinances that stood in the way.  You can view Senator Weinberg’s comments at 9:50 pm, the response from Council, the manager and Township attorney at 10:18 pm.

While there was no final conclusion as of that July meeting, the Township attorney stated that it seemed, based on his review, that the ordinances stemmed back from the days of prohibition.  It appears they are a throwback to the days when law enforcement wanted windows for all businesses (to see if you were literally operating an illegal gin joint) and when harmful fumes would collect in basements (due to lack of adequate ventilation).

As I’m working on the elimination of stale ordinances hampering residents and businesses with pointless regulations, I stated that I would add it to the list of “out-of-date” ordinances, still stuck on our books.

Considering the odds of running a speakeasy are fairly low and the dangers of harmful inhalation are now handled through safety regulations, a compromise was reached to comply with the vague technicalities, whereas the owner would install cameras to give police “access” to see that no bootleg liquor is being sold, while the council contemplated the best way to address the severely out-of-date ordinances that led to this complicated workaround.

And in October, after agreements were worked out and legal i’s were dotted, an “Amusement or Recreation Business License, Certificate No. 821” was issued.

But this business isn’t slated for just ANY basement.  It’s the basement of 545 Cedar Lane — and Senator Loretta Weinberg has an office in that building.

Wasting little time, Senate Majority Leader had her chief of staff write the Township complaining about the possibility that a family-friendly establishment might use the same entrance as she and her constituents.

And then, Senator Weinberg stated that “even though the [township] lawyer seems to have deemed the ordinance something going back to Prohibition days – it is still an ordinance on the books. Perhaps it hasn’t been used in a long time, because we have not been asked to house such an operation on Cedar Lane.” 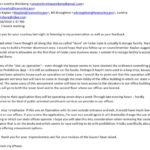 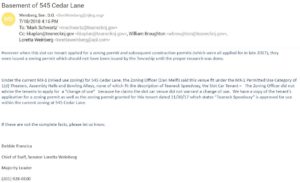 TL;DR: It’s law — and however nonsensical, however outdated, the law must be followed.  Especially when you work in the building!

Folks, this is not a bowling alley.  Perhaps, the good Senator truly believes in every technicality of the law being adhered to, even when it makes little sense.  But, if that’s the case, it raises questions about other ordinances on the books.

Sec. 29A-18Same — Permitted area of window display signs.
[Ord. No. 1329, § 5]
Except during the course of repairs or alterations, no more than 25% of the square footage of any single window display area shall be devoted to signs or other temporary advertising material attached to such window or windows or otherwise exposed to public view.

Take a look at the sign in the second floor window: 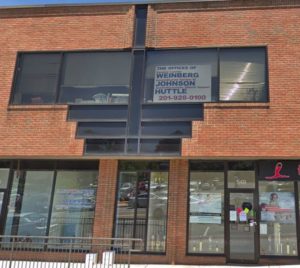 3. No window signs shall be permitted above the second story of a building1.
Then again, that’s just the sign that Senator Weinberg actually bothered to request permission to put up.  You may remember these non-permitted signs she felt, need not comply with Township ordinances, concerning signage and permit requirements: 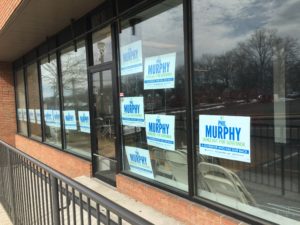 This facility is a good fit for Cedar Lane.  It is a family-friendly establishment and it will bring foot-traffic to an area that will certainly benefit from it.
Why is Senator Weinberg intentionally hurting businesses and the Township that she is supposed to represent?

The ordinances at issue in the lawsuit was apparently repealed in 1973. 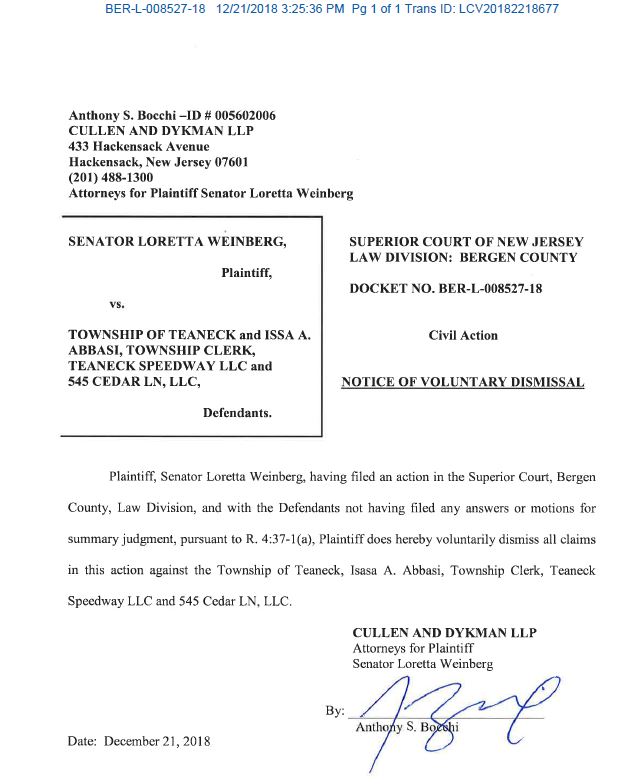 Lawsuit filed by Senator Loretta Weinberg against Teaneck:
BER-L-008527-18_Complaint
1. While I disagree with their interpretation, the Teaneck Building Department has always maintained that this provision prevents window signage on the second floor of any building and other applicants have been denied use of that space.  Regardless, the sign clearly violates other ordinances.