In 1933, Dr. Barnet S. Bookstaver became President of the Teaneck Board of Health.

For 19 years, he took a salary of $1 per year (turning down the $1,800 salary offered), which paid for child hygiene stations at the Town House, Longfellow and Emerson schools, instead.

He served our school system as a full-time medical doctor, the police and fire department surgeon, and the head of our Health Department.

Dr. Bookstaver settled in Teaneck in 1928 with his wife Anna and four children (after retiring from working as an OB/GYN in NYC, working for Hebrew Convalescent Home of NYC, the physician in charge of the American Red Cross Hospital of NYC and other efforts).

Dr. Bookstaver immediately created a reporting system for illnesses, as well as quarantine measures to be put in place to monitor outbreaks of diseases.

He instituted tuberculosis patch tests and insisted that all children in the schools be inoculated against diphtheria and whooping cough.  He also said all students should be vaccinated against smallpox. 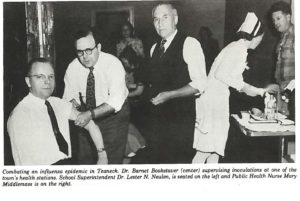 The effects were apparent quickly.

In Joy Appelbaum’s book, History of the Jews of Teaneck (available at the Teaneck Library), she describes Dr. Bookstaver as “one of 17 children from a poor, Jewish immigrant family” and “although his medical practice was very extensive and substantial, he managed to devote a considerable portion of his time to civic, religious and social endeavors”.

Encouraged others to move to Teaneck

“I do indeed recall the warm relationship between my father and Dr. Bookstaver and I have a dimmer recollection that Dr. Bookstaver’s enthusiasm about Teaneck led a good many of his friends and acquaintances to settle there”.

One of those he encouraged to move to Teaneck was the first Jewish Pricipal of the Teaneck School system, Sydney Bookstaber (Lowell School) 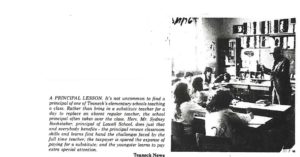 In his oral history, Mayor Costa speaks about the efforts of Dr. Bookstaver.

Dr. Bookstaver died suddenly in 1951, while assisting in extinguishing the fire at St. Anastasia’s Wooden school building on the same day that his son, Dr. Paul Bookstaver was performing his first major operation at Holy Name Hospital, where his father passed away.

In 1976, Joy Appelbaumsubmitted a letter to the Township Council requesting that a park in Teaneck be named in Dr. Bookstaver’s memory.  She was joined by Police Chief Robert P. Fizpatrick, members of the Board of Education, the Director of the Teaneck Public Library, President of the Chamber of Commerce and numerous other residents.  After review by the PPRAB, in August of that year, Council unanimously voted to rename Station park in memory of Dr. Barnet S. Bookstaver.  It stands opposite of the TVAC he helped found.