One question that comes up often, is about the difference between a resolution and an ordinance.  The State statute spells out a technical difference (click here for NJSA 40:49-1), but one simple distinction is that ordinances are forever, while resolutions expire with the council that passes it.

The “forever” aspect of ordinances has some interesting effects when the future is very different than the era in which it was passed.

If you’ve been following these posts, you’ve already seen us send ordinances forbidding residents from wearing the dress of the opposite sex off our books.  Same for ordinances requiring visual access from the street for businesses (to prevent speakeasies during prohibition), banning pinball (to protect the children) and dozens more that were so far past their expiration that it was clear someone should finally remove them from the official code-book.

But we are far from done.

There are rules and regulations that we are subject to now that have no relationship to their original purpose.  And I’d like your help identifying them.

While I’m taking suggestions — I’m by no means offering promises.

I pledge to tackle the most far reaching and burdensome suggestions first.  I will look into the original reasons for the rule and discuss the issues with current department heads.  After I get input from the departments, the manager and my colleagues on council, I’ll put forward an ordinance to tweak or repeal the old rules, if it’s deemed appropriate.

As an example, let’s take a Teaneck Code 3A-3 Registration of Alarm Systems

According to Census data, the largest population numbers appear in the 1970’s, which had several thousand more at the peak, than we have today.

Along with the rise in population, came the advent of the residential alarm system.  Unfortunately, the systems were not very reliable.  As per sources at the time, it didn’t take much to set these alarms off.

“They can set these alarms off by looking at them funny,” one officer said. “The wind sets them off.”

“There were 2,336 false burglar alarms in Teaneck in 1977, and 18 over the past weekend alone. Police say there is an average of eight false alarms – each of which requires a patrolman to rush to the scene – a day in Teaneck”

Police were being dispatched immediately, and resources were being stretched thin.  Upwards of 6 to 8 false alarms were coming in every day.

In a memorandum from Police Chief Fitzpatrick to the Township manager later that year, they described the problems alarms were posing in the township.

Adding to the problem, residents were even reported to be testing police response times by intentionally setting off false alarms.

To solve the issue of false alarms, an ordinance was requested, which would create a fine for false alarms (Council decided to impose this fine only after the third false alarm).

Another issue, compounding the police resource problem was the advent of automated call systems.  When an alarm would go off, some systems would “call-in” to the police department.  As per The Sunday Record on April 2, 1978:

Some remote systems have an automatic dialer which, in the event of an alarm, sends a prerecorded message over telephone lines to anyone you choose. (Do not direct the message to police without prior approval.)

Care to guess what happened next?

So, in an effort to find out who to contact, when a machine declared in robotic cadence that they must be dispatched to a particular residence, a registration requirement, indicating a telephone number where the owner and authorized contact could be found, was also included in the ordinance.

False alarms and Registration needs in 2019

Today, both requirements are still in force, as well as a subsequent requirement that all alarms stop sounding after 20 minutes.

The need to reduce false alarms is still valid and the fine (after three false alarms) is serving its purpose of deterrence.  The 20 minute deadline to shut off the alarm is more than sufficient in an era of police response times of fewer than 5 minutes.

But, do we need a registration requirement for every alarm in town?

That’s the question I sought to answer.

I asked about the number of alarms we have registered1 (it’s just 987) and the amount of money we spend processing the requests (in terms of salaried employees dealing with pen and paper renewal forms, checks for payment, etc…).  As per the police department, we don’t track individual internal costs,

But most importantly, are there any automated calls coming in, for which we need the requirement to begin with?

As it turns out, alarm companies are now calling in alarms with live operators, while simultaneously raising owners on the second line.  Further, the requirement, to the extent a handful of people abide by it, could be prohibiting people from installation of systems, which would themselves, cause a deterrence effect in terms of break-ins and thefts.

Therefore, I’m introducing this ordinance to remove the residential registration requirement.  It may have made some sense in the era of automated calls in the pre-mobile phone days, but it seems to have outlived its usefulness.

If anything, a need to have an point of contact for every homeowner may be more worthwhile.  But I’ll let someone articulate that need before I think of creating any regulations that may seem like overkill when my kids are old enough to remove unnecessary rules made today.

Let me know where I should look next. 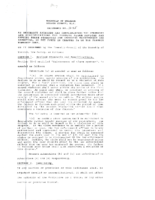 For those that haven’t been flowing the issue closely: END_OF_DOCUMENT_TOKEN_TO_BE_REPLACED