How does Teaneck compare to surrounding areas in terms of bonding?

In the State of New Jersey, municipalities may bond up to the debt limit1, which is 3.5% of the equalized valuation2 of taxable real estate.

In plain English: each town adds up the value of all their land, buildings, etc… averaged over the last three years.  The limit they can bond is 3.5% of that number.  And since the amount each town can bond is relative to their individual valuations, you get a metric that can be compared.

Here’s how Teaneck looks, based on the submitted annual debt statements from Bergenfield, Bogota, Englewood, Hackensack and New Milford

Each link below will bring you to the Annual Debt Statement, filed under oath with the State of New Jersey.

We Stand United with our Asian, Asian-American and Pacific Islanders (AAPI) Communities

The Teaneck Council will be adopting a Resolution on Thursday night declaring solidarity with Asian, Asian-American and Pacific Islanders (AAPI) Communities to stand in support with those affected by the terrible shooting in Atlanta, Georgia on March 16th.
Sadly, hate crimes motivated by anti-Asian sentiment have jumped 1,900% in New York City in 2020 and almost 3,000 reports of anti-Asian discrimination between March 19 and December 31, 2020 have been recorded by the Stop AAPI Hate.
Moreover, racially-motivated assaults and harassment targeting of AAPI seniors have dramatically increased and include the recent attack and subsequent tragic death of 84-year-old Vicha Ratanapakdee in San Francisco on January 28, 2021.
In response to the xenophobic and inflammatory rhetoric about COVID-19, President Joseph R. Biden Jr. issued an Executive Order on January 26th during the first week of his administration to show that most Americans across the country abhor this type of behavior by the bigots who commit these crimes.
The Teaneck Mayor and Council unanimously passed a resolution rejecting hate within the Township and support measures at the municipal and state level to combat the insidious and persistent impact of racism.
The Resolution that will be adopted by the Teaneck Council this Thursday night will:

END_OF_DOCUMENT_TOKEN_TO_BE_REPLACED

The Settlement with Glenpointe announced and approved by the Township includes:

The full amount the Township is refunding based on the litigation is: $1,711,869 + interest

The chart below indicates the refunds by year, which can also be found in Resolution 58-2021 on the Township’s website. 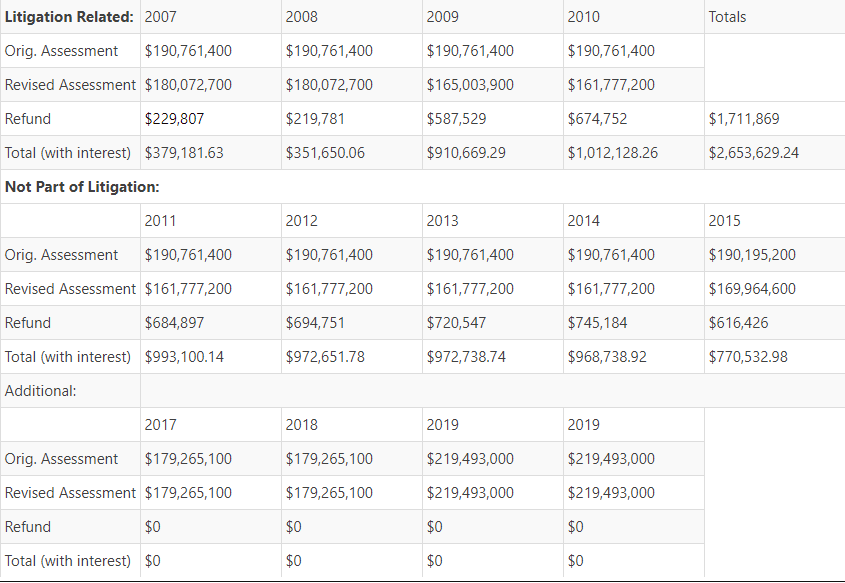 What is the Glenpointe Tax Appeal?

The Glenpointe complex, consisting of Hotels, Offices, Atriums, parking lots and more appealed the assessment of their taxes for the years 2007 through 20101.

Had the Glenpointe prevailed, the Township would have been responsible for refunding over $15 million dollars.

[Note: $15M figure does not take into account tax appeals for years 2011 through 2018, which are included in the settlement agreed to by the parties]

After the Superior Court found mostly for the Town, the appeals were ultimately settled for $8,083,000 (including interest).

From Judge Andresini:
(all quotes are fully explained below with relevant links to the opinion)

[T]he court rejects Plaintiff’s expert’s determination of stabilized revenue. Given that the Township’s expert’s stabilized ADR figures are in line with the actual ADR of the subject Hotel for the relevant tax years, did not overstate the effect of the economic downturn on those years, and are supported by the comparable data sets contained in the PKF trends he used, the court finds his stabilization of the subject Hotel’s revenues to be reliable and will adopt his conclusions of revenues accordingly.

END_OF_DOCUMENT_TOKEN_TO_BE_REPLACED

After audio surfaced of Alexandra Soriano-Taveras calling for a boycott of Cedar Lane businesses, questions began to swarm about her fitness to represent the 37th District, which includes Teaneck, in the NJ Assembly.

“There was a call to action in Teaneck this past summer and I attended to speak up and speak out against our town leadership who once again was not listening to the voices of our community.”